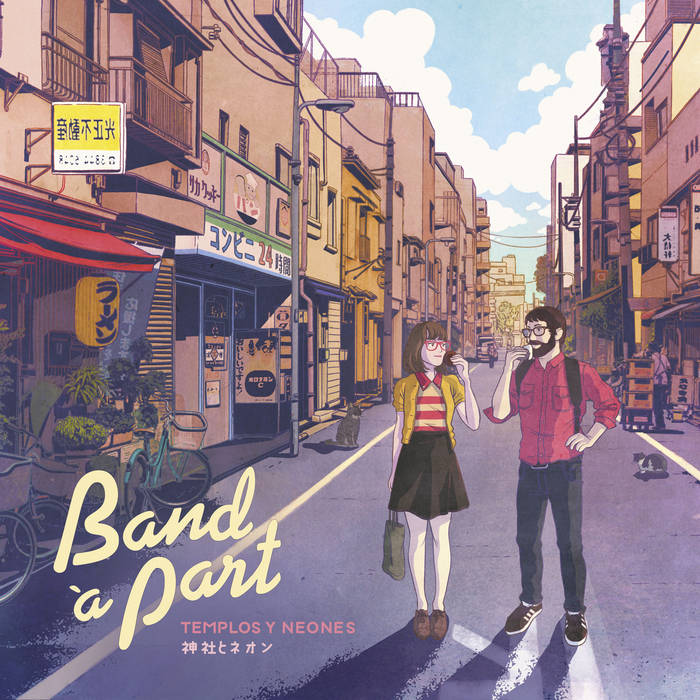 sv-lichtenberg-47 Perfect pop, everyone should have this in their collection. Favorite track: Cómo Hablar Con Chicas En Las Fiestas.

Sometimes a life is a story that can be told through our travels throughout our life. It has been a long time since we have heard any news from BAND À PART, but then, traveling takes time. But the road fills us with inspiration, and in the case of Javi and Coral, the result of this is “Templos Y Neones”, their second full-length album, and the objective, is inspired, on some songs, by a trip to the incredible city of Tokyo. This is an album that moves from night to day, that is drunk with Japanese references both in terms of sound and visuals, reaching heights that go beyond pop music. This album is an experience, and it is rich, diverse, sometimes slippery, and like all good journeys, it is exciting.

They talk about City Pop (a musical style that came about during the period of bonanza in Japan in the eighties, that was a mix of disco, funk and synth-pop), about vapor wave and about future funk. Groups like CORNELIUS, SNAILS HOUSE, SPAZZKID, ROOSEVELT, SUMMER CAMP and MAGDALENA BAY. The thing is, “Templos Y Neones” is an album that inevitably breathes a fusion of cultures and references, which makes listening to it tremendously fun and stimulating. The first side, the one that represents the more nocturnal and hedonistic part, abounds in dance music, neons, and bright lights, beginning with “Cómo Hablar Con Chicas En Las Fiestas”, highly danceable and catchy electronic J-Pop, which they had already given us as an advance Digital Single. “Nuestro Momento” is darker, with dense textures, thick synthesizers, and cheekiness when it comes to looking at the dance floor. “El Año Sin Verano", on the other hand, highlights the group’s most purely pop elements, cleaner and more melodic, reminding us of THE CURE playing with synthesizers and arpeggiators. “Templos Y Neones” is an exercise in disco music that is capable of reminding us of the classics, like Donna Summer, or of the most effective current messengers like MASTERS AT WORK or LA CASA AZUL. “City Pop” closes Side A, instrumental pop, elegant eurodisco, no concessions.

Side B, which aims to represent the daytime part of busy cities, opens with “Una Y Otra Vez”. The more organic part is back, closer to shoegazing now, with help on production from their partners Iván and Eva from LINDA GUILALA, an impeccable mix of noise and melody. “Parques Y Jardines” is acoustic lounge-pop and Shibuya-kei, somewhere between LE MANS and NIZA, with some marvelous strumming on the guitar. With everything that reminds us of things made here, it is incredible that this is ultimately a fairly loyal version of “Sunny Silent Park” by the Japanese group SWINGING POPSICLE. “La Neurona Espejo” brings us right back to the most danceable europop, somewhere between “Disco 2000” and “Dancing Queen”, because during the day there are also lights and colors everywhere, while “Supersimetría” is pure BAND À PART sound, charming, crystalline, those kinds of songs that we, fans of the best indie-pop love so much. And to wrap things up, “Todas Se Llaman Anne”, is an enthralling, instrumental chamber pop delicacy, very close to THE YEARNING’s best pieces, and even to some of the most evocative and playful songs by THE DIVINE COMEDY.

Javi and Coral are back with their suitcase full of stories, melodies, and images. Now we just have to give them our hands and let them lead us.