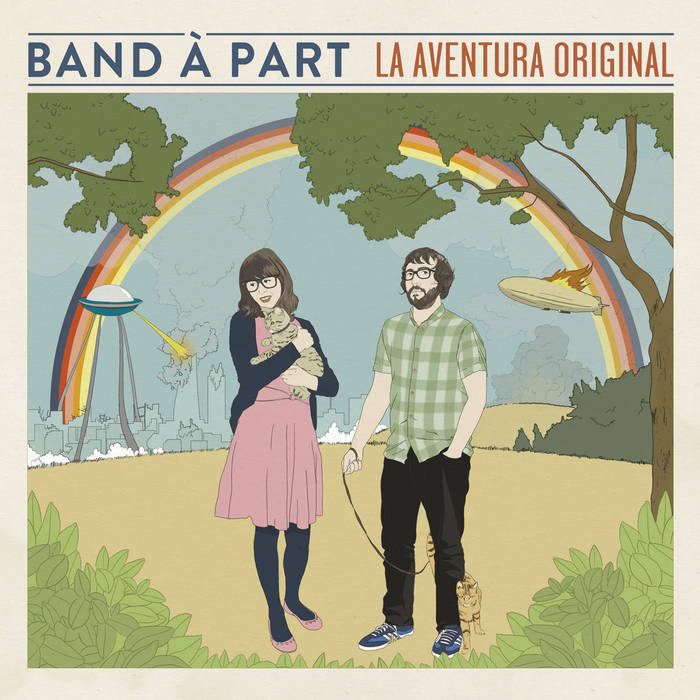 These last few years have been a whirlwind for BAND Á PART. Their two singles have flown out of stores; they’ve played in festivals like Indietracks (UK) and Contempopranea; they’ve brought their music to cities like Berlin (as part of the line-up of Berlin PopFest). Soon they’re running off to Cardiff to take part in the indie festival, “Wales Goes Pop!” and this year is looking like it’s going to be the most active year they’ve had yet.

They’re even making music for a Kellogg’s commercial in the United States (there’s nothing better for cereal than Javi and Coral’s delicious melodies). There are so many people all over the world anxiously awaiting the new songs from the band that has made such a mark with its own personality and its knowledge of music that far exceeds the norm, especially when it comes to filling their songs with these qualities. And here we have a marvelous Mini-LP, a 10” orange vinyl, “La Aventura Original”, to scratch the itch and bring the wait to an end.

Things kick off with a huge hit, a song that will definitely be played endlessly in all the indie clubs on the planet. “Verano Azul, Invierno Nuclear” is an incredible song that moves from the calypso of Harry Belafonte to electronic pop, somewhere between PASSION PIT and LA CASA AZUL, capable of reflecting the contrast between optimism and reality, fantasy and apocalypse, in one bright chorus. It’s amazing. But before you can even catch your breath, “El Chico Del Norte” arrives, submerging chamber pop in analogical keyboards à la STEREOLAB, with a bridge that marches to a bossa beat, to tell the story of a boy from the north – an imaginary boy the song’s protagonist doesn’t know. The protagonist imagines his life and feels a connection with his nostalgia, his sadness and the only album the boy from the north ever released, “Un Soplo En El Corazón.” “Postales De La Costa Este” brings their influences out to shine: Richard Hawley’s guitars, Phil Spector’s rhythms and choruses, pianos, vibrant hammonds, clavichords, and a lot a lot of reverb. All of this is mixed elegantly and preciously to finish with an instrumental development that sweetens lounge music, blossoming somewhere between jazz and cosmic synthesizers.

Side two begins with “Franny Y Tú,” a wonderful hyper-energetic sunshine pop song that leaves us with echoes of FLIPPER’S GUITAR and NIZA, while sifting through the scenes of an adolescent friendship, a summer that stays with you for the rest of your life – two children at the gates of adolescence spend an entire summer between rooftops and rooms, as if nothing else in the world existed. After thousands of unforgettable moments, the time comes for them to separate… Years later, their destinies have followed very different paths.

“¿Que Tal Copycat?” is a sugary punk-pop song with japanese touches and influences from the most accelerated indie-pop (APPLES IN STEREO, FAT TULIPS, ALL GIRL SUMMER FUN CLUB, THE AISLERS SET…). The band pours all their urgency into playful keyboards, to give way to the final elegance of “Contra Toda Previsión.” The hopeful and optimistic song that brings this marvelous Mini-LP to a close is full of gorgeous arrangements, somewhere between the lazy immediacy of the “Juno” soundtrack and the stunning brightness of ACID HOUSE KINGS. It’s ideal and necessary closure for this whole emotional journey: after the day-to-day apocalypse, the nostalgia, the falling in and out of love, the hate… this song is hope; it’s the light at the end of the tunnel. Get up and go outside, decide that everything’s going to be alright, don’t worry about what’s coming next, because there is only one thing: this very moment and these six incredible songs.