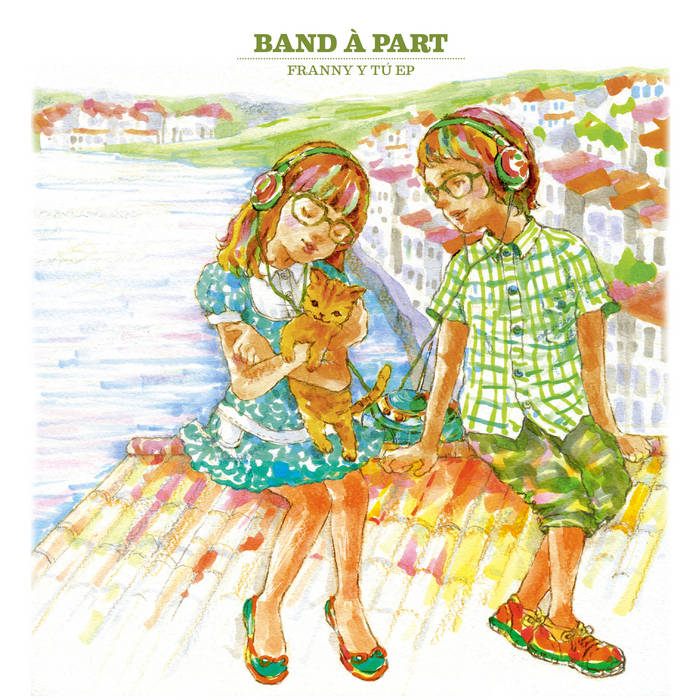 The Madrid-based duo of Javi Román and Coral Rodríguez did it again with that marvelous 10” vinyl mini-LP called “La Aventura Original” that we put out a few months ago. It was all huge songs, infinitely addictive melodies, crazed fans, and a significant international reaction. “Franny Y Tú” is the logical continuation of all that, a new collection of songs that proves that the group is currently in the midst of a special state of inspiration. Elefant Records is releasing this new single as a green 7”, 333-copy limited-edition, with cover art by Ray Kimura, a Japanese artist who is deeply in love with music – a love which can clearly be seen in her marvelous paintings of Jarvis Cocker, SLOWDIVE, SONIC YOUTH, and MY BLOODY VALENTINE, as well as in her delicious cover art for groups like ALPACA SPORTS.

“Franny Y Tú” comes from “La Aventura Original” and it celebrates BAND À PART’s best qualities: light, agile songs; high energy; so many influences that showcase their extensive musical culture; and intelligent, emotional lyrics. On this special occasion, we have a story of youth and of summer that talks about lives that drift apart only to be brought back together later, though in a very different way; all with Coral’s sweet voice reminding us of the elegance of our beloved NIZA. “David Y Claudia” is a delicate version of the LOS PLANETAS song that was released on that fantastic “Pop”. It keeps the playful guitar arrangements, the lyrics about an obsessive love, and gives it a softer touch that allows for a new perspective on this classic Spanish pop song. “Cascabel Y Yo” was originally released on a compilation album released by WIAWYA for the 2012 London Olympics, and which also included songs by groups like SAINT ETIENNE, FLOTATION TOY WARNING, Darren Hayman, WHITE TOWN, and LINDA GUILALA. They have re-recorded the song for this special occasion, developing its most radiant aspects, along the lines of CLUB 8 but with the danceable qualities of Guille Milkyway’s production work. “¿Qué Tal Copycat?” was also on “La Aventura Original” but this time it’s revised in a more hillbilly key – a style that highlights the irony and the cynicism of the lyrics – and loses that punk-pop push that the original had and substitutes it for more elegant guitars.

This new release is a great addition to their already marvelous discography, and it will certainly let them continue with their hits and highlights. Once again, the single does nothing but make us want more of BAND À PART. We can never get enough.