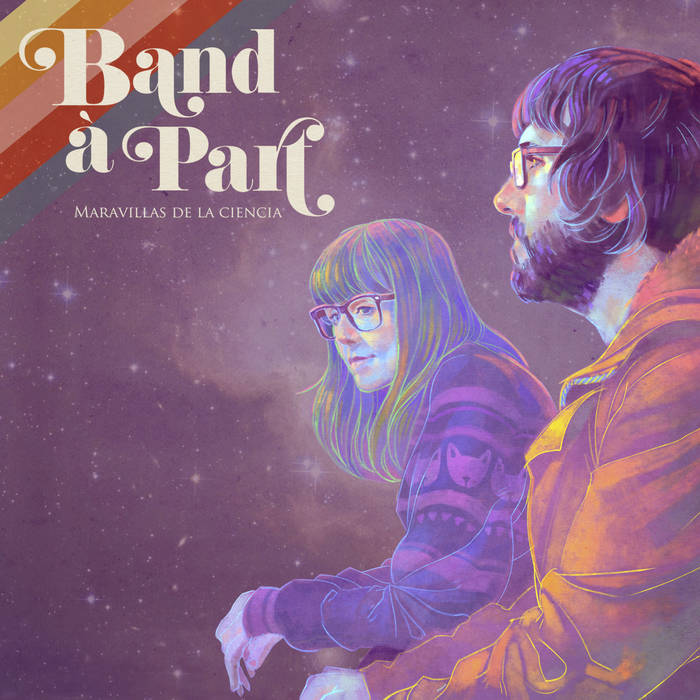 d This reminds me of Astrud Gilberto's lovely voice (Girl from Ipanema) with some infectious music. Very enjoyable.

It has been a few years since Javi and Coral’s songs began forming a part of our catalogue. And in those years, BAND À PART has grown little by little, their releases have sold out and gone out of print, and the whole world has heard of them and enjoyed their songs. “Maravillas De La Ciencia” is like a summary of all of this and much more, a compilation of their singles, their mini-LP, songs from other compilations, and even a few previously unreleased tracks as little gifts.

This collection of songs is necessary for so many reasons; the first and most obvious is that all of their releases so far are absolutely sold out and no longer available. Small collectors’ pieces with incredible cover art by artists as distinguished as Borja Bonafuente and Ray Kimura (and now we can add the cover for “Maravillas De La Ciencia” to this list, with artwork by Paco Martínez Tomás [Odewill]). They are also necessary in order to recover those versions they did of FAMILY (“El Bello Verano”, for the recently released tribute album) and of LOS PLANETAS (that “David Y Claudia” that was included on the single “Franny Y Tú”). But above all, it is necessary to evoke a space in time in which, together, we have enjoyed marvellous things. The time begins when they won the demo contest in Contempopránea 2008 (from which they wrote their main theme song) and which brought them to play in festivals all over the world, like Indietracks, Wales Goes Pop!, Berlin Popfest, Lemon Pop, Minifestival… and soon in the New York Popfest. In this time, they have been well-received by both audiences and critics, and we have also been able to enjoy several videos, some of which received prizes in festivals. “Una Persona Normal Con Gafas De Metal” won the first prize in the Castilla La Mancha Film Festival, and “Verano Azul, Invierno Nuclear” won the first prize in video-creation in the Abycine Film Festival. In this time, they have also: written the music for a Kellogg’s commercial in the States, appeared on various Elefant compilations in Japan, been played on TV shows and movies all over the world, remixed “She’ll Come Back For Indian Summer” by our friends ALPACA SPORTS, participated on an English compilation by Wiaiwya for the British olympics, and even included a version of “Postales” on a compilation by Annika. But there’s more - among these 22 songs there are three small gifts: the theme song for the first Madrid Popfest, and two delicious demo-versions of songs from their first demos that have still never been seen, “Cosas Que Nunca Te Dije” and “Otra Vez Tú”.

Just taking a quick look at the songs they have cultivated over the course of three 7” singles and one mini-LP makes us dizzy thinking about how much the group has grown: songs like “Verano Azul, Invierno Nuclear”, “No Sé Por Qué”, “Blankets” (dedicated to the graphic novel by Craig Thompson), “Sputnik, Mi Amor”, and “La Merienda”, to name just a select few, have become references in Elefant Records’ catalogue. And this album is the confirmation, the sublimation of all of this. Something that gives a whole new interpretation to that prominent sentence on the inside of the album: “Lo que antes era importante, hoy al fin es irrelevante” (What was important before, now is ultimately irrelevant). BAND À PART is a group without limits, in constant growth; a wonder.